The room-renting start-up reached an agreement with the state Wednesday to deliver anonymized records of all its New York hosts, and to identify hosts Mr. Schneiderman decides to further investigate. Mr. Schneiderman maintains that the startup contributes to New York’s housing shortage and drains revenue from hotel taxes. Landlord’s use the service to illegally rent out apartments for short stays, he alleges, cutting down on available housing and boosting prices. Recent reports of prostitutes using the service for liaisons with clients, hasn’t helped matters. And the probe could well dampen enthusiasm for informal room-renting, harming the startup. Customers are more sensitive than ever to data privacy, and willing to punish companies over the issue. For example, spurned customers helped push Target Corp. earnings down 16% percent. Discomfort with authorities scrutinizing customer transactions for illegal activity could do prove an even stronger deterrent. “Before people saw this as some supplemental income,” said David Klein, a technology attorney at Klein, Moynihan & Turco LLP.  “But now they are opening up their house [to regulators] it’s going to be less comfortable.”

But Airbnb has already gained significant momentum and the cache of a cultural movement, making a single regulator’s action unlikely to discourage the majority of hosts, said Gerald Ferguson, a data privacy attorney at the law firm Baker & Hostetler LLP. But if other regulators follow Mr. Schneiderman’s example, that could change. “If this ends up being the first of many waves of law enforcement there could be a chilling effect,” Mr. Ferguson said. 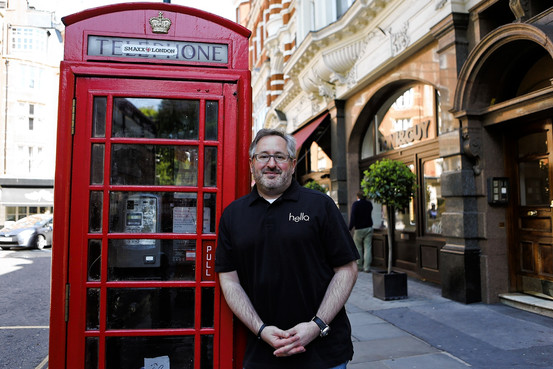 Craig Dubitsky, founder and CEO of Hello Products, which was sued by Procter & Gamble. Daniella

Weeks after Craig Dubitsky’s new company delivered its first shipment of “pink grapefruit” and “mojito mint” toothpaste to about 8,000 stores across the U.S., a letter arrived at his small Montclair, N.J., business, Hello Products LLC.

The consumer products giant and maker of Crest toothpaste wanted Hello to retract its claim—on its labels, in a print ad and on its website—that its toothpaste was “99% Natural.” “It really puts the fear of God into you,” says Mr. Dubitsky, a 48-year-old entrepreneur.

Though he stood by the claim, Mr. Dubitsky said he offered to remove it on the next batch of toothpaste labels, to be printed within a few months. That wasn’t good enough. In January, P&G sued Hello, charging it with false advertising as a direct competitor under federal law.

Claims about a product’s benefits are almost always the jumping off point for marketing and advertising, but overstating the situation—intentionally or unintentionally—can open a manufacturer up to allegations of false advertising. Rivals can claim violations of federal law, while consumers may launch class-action lawsuits under state consumer-protection laws. Small businesses, without a team dedicated to legal and regulatory issues, can easily land on the wrong side of the rules, at least in the eyes of a rival.

Under truth-in-advertising rules, ads must be “truthful and nondeceptive” with evidence to back up their claims, according to Federal Trade Commission guidelines for small advertisers. Penalties can range from cease-and-desist orders, to fines of $16,000 a day, per infraction, according to the government agency. Since 2010, for instance, the FTC has brought charges against 65 advertisers for deceptive health ads alone.

In March, a Supreme Court ruling widened the range of businesses that can sue other companies for false advertising under the federal Lanham Act, by allowing businesses that aren’t direct competitors to pursue claims.

Mr. Dubitsky of Hello settled its legal dispute with P&G in March, agreeing to stop selling products with the old label by the end of that month.

Mr. Dubitsky says he believes P&G used federal advertising laws to bully a small competitor—a trend he says he believes is also on the rise. “They were saying that we couldn’t call it natural because there were chemicals involved. You know another ‘chemical’ process? Photosynthesis,” he says. “All this stuff is a gray area,” he says about such advertising claims.

A spokesman for P&G declined to comment although it confirmed the details of the dispute. In its March statement, P&G accused Hello of violating advertising laws because its toothpaste “contains ingredients that are extensively and chemically processed,” including Fluoride, and wasn’t as “natural” as it claimed.

On top of legal fees, which Mr. Dubitsky said came to “six figures,” his company was also left with roughly 100,000 tubes of toothpaste that couldn’t be sold. Mr. Dubitsky wouldn’t disclose the company’s annual revenue, saying only that it’s “well over” $1 million. The company currently has seven employees.

After the P&G injunction, Hello changed its packaging from “99% Natural” to “Naturally Friendly.” As for the old tubes, Hello handed them out on the streets of Manhattan—getting some marketing mileage out of the problematic packages.

Many of the companies that get tangled up in false-advertising claims “are small companies that aren’t intentionally doing something wrong, but simply don’t know where to draw the line,” says Lee Peeler, a former deputy director of Federal Trade Commission’s consumer protection bureau and the president of the Advertising Self-Regulatory Council, a division of the Council of Better Business Bureaus that monitors the advertising market. Of the 150 cases of false advertising investigated each year by the council, some 95% are resolved by advertisers after being notified of a problem—such as unsubstantiated claims, misleading prices or uncredited endorsements, Mr. Peeler says.

He adds, “The Internet has really changed things for small companies, because they can now make their own ads and get them in front of consumers fast.”

“The Internet makes it easier to make mistakes,” says David Klein, a managing partner at Klein Moynihan Turco LLP in New York who represents small advertisers. “In order to keep up with the big players, they feel like they have to exaggerate and they can get in trouble,” he says, adding that he is seeing more small firms getting caught up in false-advertising cases in recent years.

Some recent cases—such as federal regulators ruling against health claims by Pom Wonderful LLC’s juice (which the company is appealing)—have raised the profile of claims of misleading marketing, and may inspire similar lawsuits. Many food companies are backing away from claims of “natural” in the face of lawsuits.

Last week, Vibram USA Inc., the maker of FiveFingers running shoes, settled a class-action lawsuit, filed in U.S. District Court in Massachusetts in March 2012, over ads claiming its five-toed shoes strengthened muscles and prevented injuries. The Concord, Mass., company offered to pay a total of $3.75 million to customers, who paid about $100 for the shoes, and agreed to stop making the claims.

“For us it was a decision based on legal costs,” said Vibram USA CEO Mike Gionfriddo, adding that the legal fees to date are already higher than the cost of the settlement. He said the company removed the health claims in 2012, when the complaint was filed: “We didn’t want to mislead our customers.”